3. RULES AND CONDITIONS OF PLAY
1. The tournament will be governed by the Laws of Chess and FIDE Code of Ethics, by these Rules and by the principal referee's instructions.
2. There is a complaint form.
3. Players can not carry electronic communication devices and accessories, except in the terms set by the referee.

4. CLAIMS
1. Each player has to review his data in the official lists.
2. A Referee's decision is appealable to the Appeals Committee, by writing, within 15 minutes after the end of the game. The Committee will be composed by the Tournament Director, with the deciding vote, and 4 players.
5. TOLERANCE FOR NON-APPEARANCE
It allows a maximum delay of 30 minutes, except the 1st and 2nd round, which is 45 minutes.

6. DRAW OFFER CONDITIONS
Draw may be agreed in a game only when one player has made, counted among his own plays, the least fifteen of them consisting of pawn moves or captures of pieces.

7. DISQUALIFICATION
Failure of a player to a round will result in your disqualification, unless in writing and ask to be excused to continue. Supposed final disqualification: (a) the accumulation of two to appear, except as authorized by the Referee and the Director; (b) severe fault; and (c) non-payment of registration fee.
8. TIE
1. Performance, as Swiss Manager deployment announced before round.
2. Buchholz, less than 3 worst opponents, as actual results. Open sub2150: Buchholz, less than 2 worst opponents.
3. Progressive FIDE.

9. REGISTRATION. FEES. CHANGE OF TOURNAMENT
ñ  Admission: Players can register only in one tournament.
ñ  Open Sub-2150: Players with an ELO below 2150 in the lists FIDE or FADA, valid in 2011, 2012 or at the beginning of the tournament. In case of players “out of list”, it will be used the last published ELO rating. Each player has the responsibility of checking his/her ELO to register in Open sub2150, specially the expectant change published by FIDE.
ñ  Change of tournament: Players can change between tournaments, if they decide to do before  the 4nd round of General Tournament had been finished. A new fee is required (20€), in case of change from General Tournament to sub2150.
ñ  Deadline: Until December 30th , 2012. Organization is discretionary support subsequent entries.
ñ  Fee: All players have to pay 30 € in the account number 2103 5750 140300028438, clearly indicating full name, year of birth and country or province. Fee will be refunded to players not disqualified with a FIDE rating above 2250. Open sub2150: Player have to pay 20 €, with the same concept. If you are not staying at the hotel with the organization, will be paid 10€ plus enrollment fee.

10. BYES
ñ  Players can ask for not being paired some round, receiving 0'5 point for each “bye”.
General tournament: it may be granted until 3 “byes”, only applicable in the first 4 rounds.
Open Sub-2150:  it may be granted until 2 “byes”, only applicable in the first 3 rounds.
ñ  Requirement: written request or e-mail (clubajedrezroquetas@gmail.com), before the first round. “Byes” are only valid if players have an Organization's confirmation.
ñ  Cancellation: Players can cancel their byes by written request, before the publication of the first round or before the round for which the request bye.
11. ASSIGNMENT OF PRIZES
ñ  Cash prizes cannot be accumulated with others. In any case, players will receive the most important prize, according the Organization.
ñ  Special “sub-ELO” Prizes: it will be used the biggest ELO between FIDE, FADA or FEDA lists.  In any case, Organization will use the biggest ELO valid in 2011, 2012 or at the beginning of the tournament. In case of players “out of list”, it will be used the last published ELO rating.
ñ  Veteran players: people born in or before than 1958, who don't have more than 2300 ELO (as the same conditions as last paragraph) and neither GM, WGM, IM or WIM.
ñ  Reception: Players have to receive the prizes personally. If they couldn't do it, they have to communicate to  the Organization.
12. INFORMATION
ñ  E-mail: clubajedrezroquetas@gmail.com. Web: http://clubajedrezroquetas.blogspot.com/.
ñ  You can ask by email if you are interested in the offer for GM or IM, or if you want to go with a group of people.
HOTEL OFFER  Hotel Bahia Serena **** (seafront), in which the tournament is played.

This English rules of Roquetas Chess Festival are a summary of Spanish rules, with the main information, so if you have some doubts of one of the points, you can ask by email:  clubajedrezroquetas@gmail.com. 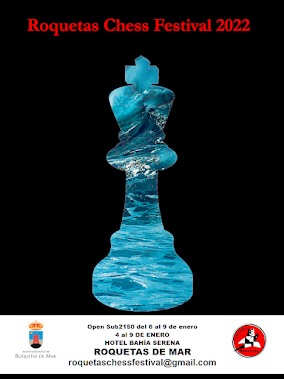